Lucia Harper (Joan Bennett) is a middle-class homemaker on Balboa Island, California, who finds herself cleaning up her angst-ridden teenager's mess...which just happens to be a dead body. THE RECKLESS MOMENT could describe Lucia's instantaneous decision to make the body "disappear"...or any number of other moments experienced by the various characters as the story progresses.

Lucia's 17-year-old daughter Bea (Geraldine Brooks of 1948's EMBRACEABLE YOU) is attracted to no-good Ted Darby (Shepperd Strudwick) and agrees to meet him late one night, despite her mother's firm warnings. Bea soon realizes mother knew best, and after struggling with Darby, she hits him in the head with her flashlight and flees. Unbeknownst to Bea, Darby stumbles, falls through a railing and is impaled on an anchor, an ugly sight which is discovered by Lucia the next morning.

At this point any logical person would have called the police and told them the whole story...but then there wouldn't be a movie, and once one gets past that issue, it's a terrifically compelling tale. Lucia is desperate to shield her daughter and loads the body in the family's little boat; she dumps the body in the water, but it's found anyway, and the hunt for the "murderer" is on.

Lucia tries to carry on with Christmas preparations, but her life grows even more complicated when a charming Irish blackmailer, Martin Donnelly (James Mason), shows up with letters linking Bea to the dead man. If Lucia wants to keep her daughter's name from being linked with murder and scandal in the press, she needs to come up with $5000 for Donnelly and his partner (Roy Roberts) in a big hurry.

As Donnelly proceeds with his blackmail plot, he begins to admire Lucia and her fierce desire to protect her family. Donnelly's growing feelings for Lucia cause him to make unexpected choices and lead to a humdinger of an ending.

This is a film which calls for repeat viewings to more carefully observe the development of Lucia and Martin's relationship and the nuances of Bennett and Mason's performances. Both actors are excellent, and this must surely be one of Bennett's finest roles.

Among the curious things I noted: Lucia is stressed by Martin's demands, yet doesn't seem to feel particularly threatened by him from the outset, i.e., she gets in his car, she borrows his change to make a phone call. And Martin, perhaps reminded of his own mother and brothers, seems to like Lucia and her family as soon as he meets them, and can't keep himself from buying Lucia a small gift at the drugstore, which he hides among her groceries.

As Donnelly began to call Lucia "Lucy," I thought of another film about characters with unspoken feelings for one another, THE GHOST AND MRS. MUIR (1947). In that film, the same names are reversed, as the Captain becomes more fond of Mrs. Muir and calls her "Lucia," rather than Lucy.

Among the film's strengths are its location work, realistic set design, and strikingly authentic, timeless family relationships. The movie was filmed on Balboa Island, with a few more shots in late '40s Los Angeles. The house in the movie, with its glassed-in service porch and other interesting features, clearly communicates it's the home of a middle-class family; they may live on the beach and have a maid, but the decor is fairly plain and "lived in," grandfather (Henry O'Neill) and teenager (David Bair) share a bedroom, and the family members also share a single car.

Relations between mothers and teenagers don't seem to have changed much in 60 years; the son wheedling movie money and the mother saying to "take one dollar, not two" sounded very familiar, only the amounts have changed. And for that matter, service at the post office seemed as slow in the late '40s as it can be these days!

A completely different aspect of the film worth examining on future viewings: just how much does the loyal maid Sybil (Frances E. Williams) know, and when does she know it?

Look for a very young William Schallert, playing a police investigator in one of his earliest screen credits. 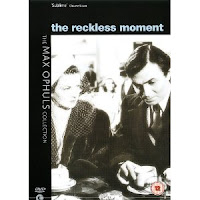 THE RECKLESS MOMENT was directed by Max Ophuls, who also directed Mason in the superb CAUGHT (1949) the same year. It's a complete mystery why these two terrific movies aren't available on DVD in the United States. Owners of all-region players can see THE RECKLESS MOMENT, as well as CAUGHT, on Region 2 DVD. DVD extras include an introduction and a commentary track; the Region 2 DVD is reviewed at DVD Beaver and Home Cinema (formerly DVD Times).

THE RECKLESS MOMENT runs a fast-paced 82 minutes; the Region 2 edition takes just 79 minutes to play due to "PAL speedup."

You can read more about the film at Noir of the Week, where it was reviewed by Paulcito.

This movie would make a fun double-bill with another late '40s film mixing murder and Christmas, LADY IN THE LAKE (1947), or alternatively with Jane Powell's bright, entertaining movie musical swansong, THE GIRL MOST LIKELY (1958). THE GIRL MOST LIKELY, which was director Mitchell Leisen's final feature film, shares THE RECKLESS MOMENT's Balboa Island setting.