A Tribute to Coleen Gray

Actress Coleen Gray was born 99 years ago today, on October 23, 1922.
She passed away on August 3, 2015, at the age of 92.
I previously paid tribute to Gray on her birthday in 2012, which directly led to my having the opportunity to interview her later that year.
I was also honored to attend her memorial service in September 2015.  One of the most memorable aspects was that she had prerecorded a greeting and testimony to be played at her service.  Sitting at the reception with Marsha Hunt and Julie Adams (who would pass away in 2019) was part of an unforgettable experience.
This year I'm marking Gray's birthday with an article originally written for ClassicFlix in 2013. I've updated the column with review links and current DVD/Blu-ray information but have left the rest of the post as it originally appeared in 2013, when Coleen was still with us. 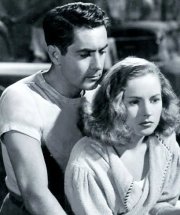 Actress Coleen Gray may not be a household name today, but she is greatly appreciated by fans of film noir, having given outstanding performances in some of the all-time noir classics.
Gray was a very fine actress, and it may be that her chameleon-like ability to submerge herself into her roles worked against her being as well remembered as some other actors of her era. It's also interesting to note that some of the films for which Gray is best known today -- NIGHTMARE ALLEY (1947) being a prime example -- did not receive critical recognition until years after their release.

I had the rare opportunity to learn about Coleen Gray's life story firsthand when I interviewed her a few months ago. Ms. Gray is a very sharp, articulate lady who is a most engaging storyteller, with many fascinating stories to tell about her life and the remarkable people with whom she worked. 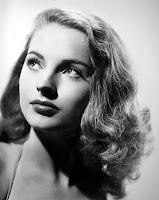 Coleen Gray was born in Nebraska in 1922. Growing up on a farm, she avidly read movie magazines and dreamed of being a movie star. She planned to teach music in public school but instead gravitated to drama and art in college. Upon graduation from Hamline University in Minnesota, she followed a sweetheart in the military to La Jolla, California, where she found work as a waitress. When the romance ended she went north to Los Angeles, where a family friend helped her find work as a typist with the YWCA.

Bored with secretarial life, Coleen was looking at want ads and saw an ad casting a play in which she'd appeared in college. She ended up joining a little theater and appeared in three plays, which led to her being spotted by an agent. 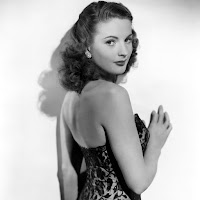 The agent took her to Fox, where Coleen suddenly found herself in a room with numerous men in suits, including the intimidating casting director, Rufus LeMaire, who barked, "So you're an actress, huh? Let's see you act!"

Utilizing the same confidence which would allow her to begin her acting career in leading roles opposite Hollywood greats, Gray launched into a couple of monologues she knew from a play, and she was promptly signed to a contract for a screen test. She then sat at home for months, paying the bills with a night job as a cashier at Thrifty Drug Store, until she finally was given her screen test. She passed with flying colors and became a contract player at 20th Century-Fox. 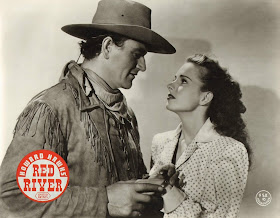 Eventually she had an opportunity to interview with Howard Hawks for RED RIVER (1948); they hit it off, and she was cast in the small but noticeable role of Fen. Before RED RIVER finally made it to theaters, however, she would also star in leading roles in two of the all-time great film noir classics, KISS OF DEATH and NIGHTMARE ALLEY (both 1947).

Gray, no shrinking violet, felt she was born for the role of Molly in NIGHTMARE ALLEY and made an appointment to see studio head Darryl Zanuck. Zanuck told her that if a major actor starred in the lead role he would consider an unknown actress for Molly.
Gray then went through some prolonged contract negotiations while making KISS OF DEATH, with Fox attempting to dangle the NIGHTMARE ALLEY role in place of her contractually required pay increase, but despite the fact she was just starting out, Gray stuck to what she felt was right and told Fox they needed to stick to the terms of her contract. She was ultimately awarded both her raise and the part in NIGHTMARE ALLEY, opposite Fox's biggest star, Tyrone Power. 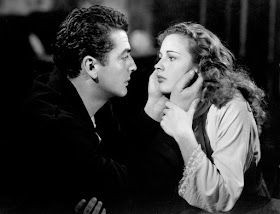 After NIGHTMARE ALLEY Gray was reunited with her KISS OF DEATH costar, Victor Mature, in FURY AT FURNACE CREEK (1948). Gray would star in many Western and film noir titles over the course of her career, and as the '50s moved on she also did a great deal of work in television.

Gray's acting career for the most part closed out as the '70s came to an end, with just a couple more roles in the '80s. She married Joseph Zeiser in 1979, and the two of them became involved in prison ministries for women. Gray drew great satisfaction from being able to play a role helping to encourage women to change their lives for the better.

Today Coleen Gray is 90 and still going strong (she'll be 91 on Wednesday), recently giving a lively interview at a screening of Stanley Kubrick's THE KILLING (1956) at the 2013 TCM Classic Film Festival. 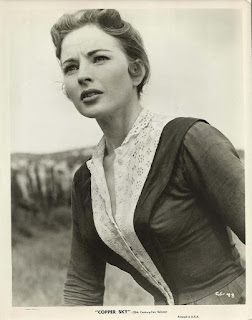 Some films with excellent Gray performances, including THE SLEEPING CITY (1950) and COPPER SKY (1957), are not yet out on DVD. (Update: Since this was first written, THE SLEEPING CITY was released on DVD and Blu-ray.) Here are some key Gray films currently available on DVD:

KISS OF DEATH (1947) - This film is understandably famous for Richard Widmark's electric debut as Tommy Udo, but the movie wouldn't work nearly as well as it does without the heartfelt lead performances by Gray and Victor Mature. Gray's open, naturalistic performance doesn't feel quite like any other screen acting of its era.

NIGHTMARE ALLEY (1947) - Gray plays Molly, the carnival girl who loves Stan (Tyrone Power), only to see his life and their relationship spiral out of control as Stan attempts to "play God" with his mentalist act.

RIDING HIGH (1950) - Gray was directed by Frank Capra and starred opposite Bing Crosby in a remake of Capra's own BROADWAY BILL (1934). 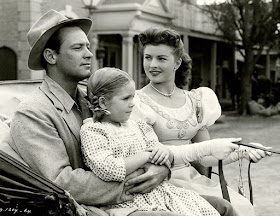 FATHER IS A BACHELOR (1950) - A cute Western romance and family comedy opposite William Holden, with little Mary Jane Saunders (seen here) in support.

THE KILLING (1956) - When Gray was interviewed prior to the screening of Kubrick's noir classic at the TCM Classic Film Festival, she recounted that she was told the filmmakers had said, "Let's get a Coleen Gray type" and then someone said, "Well, why not get Coleen Gray?" She appears as Sterling Hayden's girlfriend in the opening and closing sequences; it's a relatively small role but she's great as the film reaches its unforgettable ending.

THE LEECH WOMAN (1960) - I've not yet seen this one, but Gray's performance in this sci-fi film is admired by many.