BLACK BEAUTY (1946), starring Mona Freeman as a young girl who loves her horse, is available on DVD from ClassicFlix.
It's part of the two-film The Black Beauty Collection along with with COURAGE OF BLACK BEAUTY (1957), starring Johnny Crawford. It was released last year as No. 14 in the ClassicFlix Silver Series.
BLACK BEAUTY was originally released by 20th Century-Fox. It claims to be inspired by the famous novel by Anna Sewell (misspelled Sewall in the opening credits) but in reality, the screenplay by Lillie Hayward and Agnes Christine Johnson has very little to do with the book.
Indeed, an opening title card says that the film was "freely adapted" from the book, while "preserving the beautiful spirit of this most beloved of all horse stories." The truth is that, other than a few minutes near the end where Black Beauty falls into the wrong hands, the film is an entirely original story. 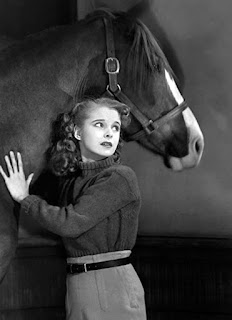 Having read the book many times growing up, I was honestly fine with this film doing its own thing, as the actual story is quite tragic in spots. This film is an enjoyable, lighthearted story which doesn't get too heavy.
Mona Freeman plays a tomboyish young British girl, Anne Wendon, whose father (Charles Evans) gives her a newborn colt. It's the father's hope that in training the horse, Anne will herself become more disciplined.
Her father's plan does the trick, and as Anne patiently trains her horse, Black Beauty, they begin to grow up together. Both horse and girl attract the attention of a visiting American, Bill Dixon (Richard Denning). Bill is clearly interested in Ann, who is currently too young for thoughts of romance, and he hopes to find her grown when he returns a couple years later. When Bill is back in the United States, he mails her a horseshoe necklace for her birthday.
When Bill does eventually return, Anne crushes on him, but she's frustrated when he now seems preoccupied with glamorous Evelyn (Evelyn Ankers, who was the real-life Mrs. Denning from 1942 until her death in 1985). Anne decides to go away to school, and when she returns as a young lady, Bill definitely takes notice...but Anne is distracted by a problem with Black Beauty.  Their timing with one another is always just a little off! 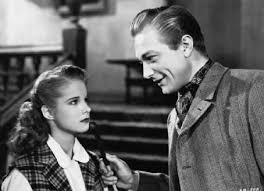 BLACK BEAUTY is a pleasant 74 minutes about an energetic, emotional young girl gradually coming of age as she falls for both a horse and a man. There are some dramatic bumps along the way, with both Anne and Black Beauty's lives endangered at various points, but all in all this is a relaxing little watch which I enjoyed.
I've been a Mona Freeman fan dating back to watching MOTHER WORE TIGHTS (1947) when I was growing up, and I later enjoyed her appearances as Modesty Blaine in reruns of MAVERICK (1959-60). Due to her youthful appearance, in the '40s and early '50s Freeman easily switched back and forth from playing leading ladies to teenage girls, and that facility playing different ages really works for her in this film. She was around 20 when this was filmed. 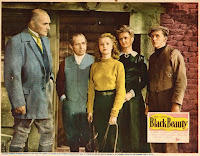 I'd also note that Freeman occasionally affects a British accent, but it's not very much in evidence here. Her riding double, who is occasionally (unintentionally) visible to the camera, was Audrey Scott.
The nice supporting cast includes Moyna MacGill (mother of Angela Lansbury), Terry Kilburn (Tiny Tim in the 1938 A CHRISTMAS CAROL), J.M. Kerrigan, and Arthur Space.
This was one of the first couple screen appearances of famed movie horse Highland Dale, who appeared with Fred MacMurray in the 20th Century-Fox film SMOKY (1946) the same year. He appeared in films and TV series until 1968; after his "retirement" he lived until 1973. 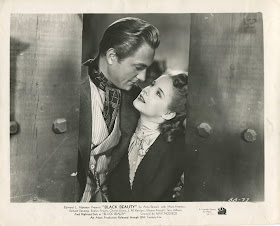 BLACK BEAUTY was directed by Max Nosseck and filmed in black and white by J. Roy Hunt. The film is fairly low budget, including the use of some back projections; a couple of riding scenes were filmed at an unknown location which could have been somewhere like Corriganville.
The score, which includes piano music, was by Dimitri Tiomkin.
The ClassicFlix DVD print is a little soft but overall is a good print, save for a couple damaged spots here and there. The soundtrack is strong.
The sole disc extras, other than the previously mentioned second film, are a gallery of trailers for five additional ClassicFlix releases.
Look for a review of COURAGE OF BLACK BEAUTY here at a future date.
Thanks to ClassicFlix for providing a review copy of this DVD.