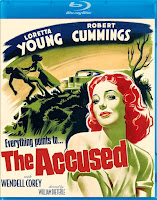 THE ACCUSED (1949), an excellent crime drama with a top cast, is available on Blu-ray from Kino Lorber.
This film was previously available in an MOD (manufactured on demand) DVD, but it's the film's first time on Blu-ray. It actually came out at the end of 2021, but thanks to Kino Lorber's plethora of excellent releases I'm just now reviewing it.
I first saw THE ACCUSED via a 35mm print from the Library of Congress at the 2017 Noir City Hollywood Festival. I hadn't seen it in the last five years and thoroughly enjoyed revisiting it.
Loretta Young plays a university psychology professor, Dr. Wilma Tuttle. As we see in the very first scenes, Wilma accidentally kills a student, Bill (Douglas Dick), who has taken her to an isolated beach area near Malibu and is attempting to force himself on her. 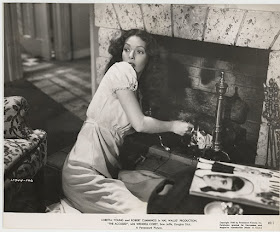 Wilma considers going to the police but is terrified of not being believed, and even if she is, she worries the notoriety could be the end of her career; as a single, self-supporting woman that's no small consideration.
However, she's consumed by guilt, which also seems to weaken her immune system, leaving her hospitalized unconscious for several days while fighting viral pneumonia. If Dr. Tuttle were analyzing herself, she might come up with the diagnosis that she's subconsciously trying to avoid thinking about and dealing with what happened, including her bad decisions following the incident.
The student's guardian, Warren Ford (Robert Cummings), comes to town. Warren, a lawyer, makes clear he's aware that Bill had some serious issues. He's also very attracted to Wilma. 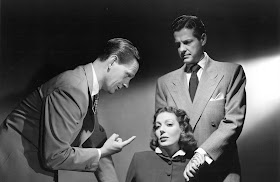 Police Detective Lt. Ted Dorgan (Wendell Corey) also likes Wilma, but at the same time he keeps finding bits of evidence that don't match the original coroner verdict that Bill accidentally drowned...and everything that pops up seems to point toward Wilma.
The film, written by Ketti Frings along with several other uncredited writers, runs a well-paced 101 minutes, although my feeling in 2017 that the ending is too abrupt holds true again on this viewing. The plot also occasionally stretches credulity, but it's so well acted by the three leads that it really doesn't matter too much.
Young plays the high-strung, repressed spinster professor who's gradually transformed both by love and by the need to look physically different from her appearance the night of the murder. Although the character is a bit cliched, Young is fascinating in the role, veering back and forth from smooth-talking professional woman to a bundle of nerves who just wants out of the situation, some way, somehow. 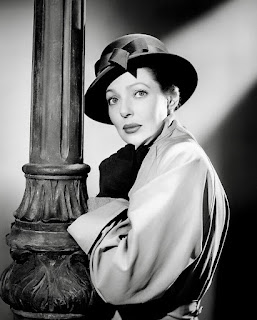 Something which occurred to me for the first time watching this is that Young had experience having to hide a major life incident, her 1935 pregnancy with Clark Gable; she later "adopted" her daughter Judy, which became known decades later. I couldn't help wondering if that stressful experience informed any of her performance, as Wilma must build lie upon lie in order to sustain her story. It's only in the film's final minutes, once the proverbial cat is out of the bag, that we finally see a relaxed, confident woman no longer burdened by lies.
Loretta has been my favorite actress for years; she is always compelling, and frankly I think she is underrated by many. This film would make an interesting double bill with another film in which Young plays a highly anxious character, CAUSE FOR ALARM! (1951).
Both Cummings and Corey are excellent and get to do a little more with very interesting characters. Late in the film Cummings' defense attorney simultaneously realizes Wilma might be responsible for the death and that Lt. Dorgan is in hot pursuit; I love the way Cummings' character immediately springs to action to protect Wilma, a true knight in shining armor.
Ford never questions what happened or reproaches her, clearly believing it wasn't her fault as he pieces together what must have happened; he instead tries to use his professional skill to try to get her out of the situation. There's a great little moment in the detective's office where he subtly tries to warn Wilma not to say anything, with the faintest shake of his head. It's an excellent, deeply layered performance. 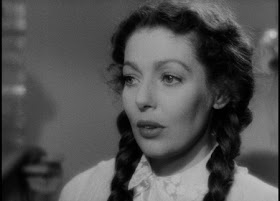 Corey might be the most interesting character of the trio, a dogged professional who is also attracted to Wilma but pursues his case despite that. A scene late in the film with his evidence analyst (Sam Jaffe), who has excellent insights into everyone involved, is really well done.
The cast also includes Suzanne Dalbert, Mickey Knox, Sara Allgood, Ann Doran, Billy Mauch, Henry Travers, Francis Pierlot, and Bess Flowers.
THE ACCUSED was directed by William Dieterle. It was filmed in black and white by Milton Krasner.
Some of the filming appears to have been done on an actual college campus, but I didn't recognize it and haven't been able to dig up the information. I assume it was a Southern California campus such as Occidental College, which appeared in other movies of that era such as GOODBYE, MY FANCY (1951), or USC. 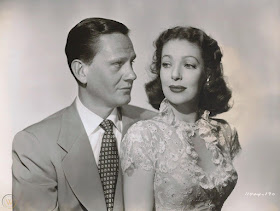 The print, while very good, is not as sharp as many of Kino Lorber's releases. At times it seems overly grainy or the picture flickers somewhat, including during the opening credits, and there is occasionally noticeable damage such as lines. That said, none of these issues are in any way deal breakers such as skips or jumps. It's simply a "very good" print rather than an "excellent" one. I have no hesitation in recommending it.

The soundtrack is strong and easy to understand.

The Blu-ray extras consist of the trailer; a five-film gallery of trailers for additional films available from Kino Lorber; and a commentary track by Eddy Von Mueller.

For another good take on this film I recommend Colin's review last fall at Riding the High Country. He sees the film much as I do.

THE ACCUSED is a very interesting, well-acted film. Recommended.

Thanks to Kino Lorber for providing a review copy of this Blu-ray.