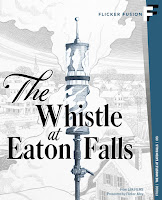 THE WHISTLE AT EATON FALLS (1951) is a very interesting "lost drama" which has been rediscovered and is now available on Blu-ray from Flicker Alley.
THE WHISTLE AT EATON FALLS was originally released by Columbia Pictures. I first became aware of it when it was shown during the 2021 "virtual" TCM Classic Film Festival. Now, less than a year later, it's available in a lovely release thanks to Flicker Alley.
It's a docudrama with an unusual storyline. Doubleday Plastics, located in Eaton Falls, New Hampshire, has been one of the area's main employers for many years, but the company is no longer doing well. Times are changing, and owner Dan Doubleday (Donald McKee) needs to purchase new equipment to remain competitive. The more efficient equipment will also result in laying off part of the workforce.
The union, headed by Brad Adams (Lloyd Bridges), is concerned about the direction things are going, but everything comes to a temporary standstill due to Doubleday's tragic death in a plane crash. 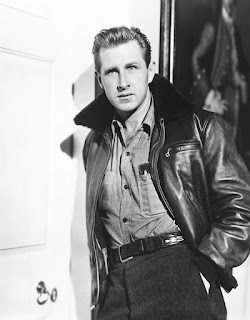 Doubleday's widow Helen (Dorothy Gish) is urged to hire the plant manager (Russell Hardie) as the new CEO, but Helen has another idea: Put Brad in charge and hope he can somehow bridge the gap between management and the union and find a way to save the company.
At times the company's prospects seem hopeless, but Brad works night and day, aided by an experienced, knowledgeable salesman (Victor Sutherland) and some of the union workers.
One might not think there's a great deal of drama to be found in a factory's struggle to modernize and remain in business, but for the most part it's quite a compelling, well-acted drama, balancing tragedy and optimism in equal measure. I particularly liked the ending, which feels well-earned for all involved.
The great film noir director Robert Siodmak does an excellent job with his cast and material which might have been dry in other hands. The movie, scripted by Lemist Esler and Virginia Shaler from a story by J. Sterling Livingston, would have benefited from shaving a few minutes from the 96-minute running time, but that's my only significant criticism.
The film has many interesting attributes, starting with the gritty location shooting in New Hampshire, with black and white photography by Joseph Brun. The film's documentary-style look, which shows scenes from daily life in the community along with depicting the bigger dramatic issues, gives the film a very different feel from the norm. 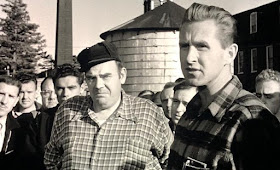 Lloyd Bridges is excellent as a man who might be in a little over his head, but he's got courage to match Mrs. Doubleday's, as well as the willingness to learn. It's a real challenge for Brad to juggle everyone's interests while dealing first and foremost with the fact that if the factory closes, no one will have jobs and any arguments between management and the union won't matter.
The role is a wonderful contrast to Bridges' creepy, insane murderer of the previous year's TRY AND GET ME (1950), not to mention his villainous roles in late '40s films such as MOONRISE (1948) and another Flicker Alley release, TRAPPED (1949) -- a true "palate cleanser"!
While I'm on the subject of Bridges, Glenn Erickson shared some additional interesting information, that the baby seen in a montage sequence is most likely Jeff Bridges. 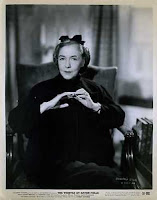 Gish presents well in a small part as a strong woman, making me think a bit of her sister Lillian's role in THE NIGHT OF THE HUNTER (1955). Two very different stories, but two equally tough women.
The remarkable cast also includes Ernest Borgnine in just his second film as one of the union workers. Other union members are played by Arthur O'Connell, James Westerfield, Parker Fennelly, and Lenore Lonergan, who appeared to excellent effect in WESTWARD THE WOMEN (1951) the same year.
Doro Merande (COVER UP) is the company secretary, and Helen Shields is interesting as the company treasurer who resents Brad being CEO. Diana Douglas, whose marriage to Kirk ended the year this film was released, plays Bridges' wife.
Carleton Carpenter, who passed away earlier this year at 95 and was best known for his appearances in MGM musicals, has a key role as a young, enthusiastic union worker whose creative projects help spark the company's renaissance. 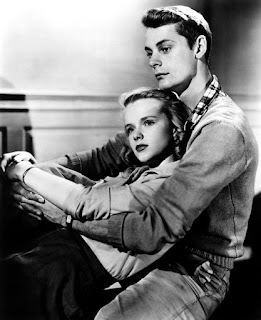 Carpenter also has the chance to perform a wonderful musical number with a young Anne Francis, playing his girlfriend. The number springs up organically at a company party and is simply delightful; they're both young and cute.
As an aside, the theming of this film and the presence of a musical number would make it great on a double bill with the musical THE PAJAMA GAME (1957)!
THE WHISTLE AT EATON FALLS is the second film released in Flicker Alley's Flicker Fusion line, which focuses on putting out Blu-rays of lesser-known rarities and archival restorations at a relatively affordable price point. Print and sound quality are both excellent.
The plentiful extras include a commentary track by historian Alan K. Rode; an isolated musical soundtrack; featurettes on the restoration and producer Louis De Rochemont; audio recordings of two songs sung by Carleton Carpenter; the trailer; an image gallery; and a booklet with an excerpt from the book KEEP 'EM IN THE EAST by Richard Koszarski.
I liked this movie, and the impressive print combined with Flicker Alley's extras make this a "must" for classic film fans looking for a terrific cast in a very different kind of movie.  Having an interesting film which was previously unknown to many of us surface and look great is a real treat.
Thanks to Flicker Alley for providing a review copy of this Blu-ray/DVD set.

THE WHISTLE AT EATON FALLS may be purchased through the Flicker Alley website as well as through retailers such as Amazon.