Around the Blogosphere This Week 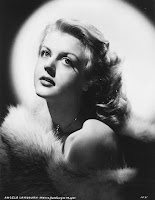 Miscellaneous bits of news and fun stuff from around the internet...
...A very happy birthday to Angela Lansbury, who turns 96 on October 16th. It was a thrill to see her in person two years ago this month, at a tribute to Robert Osborne which included a screening of DODSWORTH (1936).
...Linda Darnell was born October 16, 1923. In honor of her birthday, please visit my previous posts A Birthday Tribute to Linda Darnell and A Tribute to Linda Darnell. Both posts are filled with ideas for Linda Darnell viewing, including links to numerous film reviews.
...A 1930s-era Los Angeles home once owned by Rita Hayworth is for sale.
..."Coming soon" from Kino Lorber: TINKER TAILOR SOLDIER SPY (2011). December 14th releases include THE BRASS BOTTLE (1964) with Tony Randall and Barbara Eden, THE CHRISTMAS TREE (1969) with William Holden, and THE SEDUCTION OF JOE TYNAN (1979) with Alan Alda and Meryl Streep. 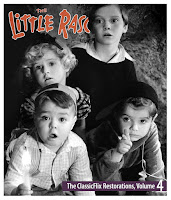 ...ClassicFlix has announced "The Little Rascals - The ClassicFlix Restorations, Vol. 4" for January 18, 2022.
...In my review of the new Academy Museum I mentioned the absence of the industry's founders from the museum. Sharon Rosen Leib writes in Forward about the Jewish founding fathers of the cinema industry ending up on the museum's "cutting room floor." It's a thought provoking and, in my view, sadly necessary article.
...Mark Harmon has left the NCIS TV series after an 18-year run.
...Also retiring is 78-year-old Alan Horn, the Chief Creative Officer of Disney Studios.
...Speaking of Disney, a film is being made for the Disney+ streaming service about the creation of Disneyland.

...And speaking of Disney+, last year I reviewed the documentary ADVENTURE THRU THE WALT DISNEY ARCHIVES (2020) when it was streamed exclusively for D23 members. The documentary will be available on Disney+ starting in mid-November, and I recommend it.
...Out this month: I'LL BE HOME FOR CHRISTMAS MOVIES, a book on Hallmark Christmas films. It will include interviews with the movies' stars and creators. There's a foreword by Hallmark star Kristoffer Polaha.
...There are new Christmas CDs this year from Kristin Chenoweth, Norah Jones, and Kelly Clarkson.
...Kino Lorber is currently hosting a Blu-ray sale, including some very recent releases.

...David Wangberg of Cinema Sentries interviewed Leonard Maltin about his brand-new book, STARSTRUCK: MY UNLIKELY ROAD TO HOLLYWOOD. It's an enjoyable interview, and I'm looking forward to the book!
...New fall cookbook titles: COOKIES: THE NEW CLASSICS by Jesse Szewczyk and HEALTHY AND DELICIOUS INSTANT POT from America's Test Kitchen.
...Noir Girl Casey Koester recently spoke with Eddie Muller about the new edition of his book DARK CITY. Among other things there's a delightful tidbit about Eddie's original career choice, before he became the "Czar of Noir."
...Erica has reviewed THE BIG HEAT (1953) and HUMAN DESIRE (1954) for her blog Poppity Talks Classic Film. It's part of a Glenn Ford Blogathon hosted by Hamlette's Soliloquy and Coffee, Classics, and Craziness. 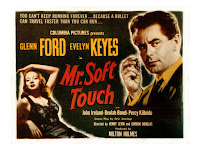 ...Kristina of Speakeasy also participated in the Ford blogathon, writing about MR. SOFT TOUCH (1949).
...One of KC's latest reviews at Watching Classic Movies is of SHADOW OF THE THIN MAN (1941).
...Karen Hannsberry reviews JEWEL ROBBERY (1932), starring William Powell and Kay Francis, for her blog Shadows and Satin.
...And at Riding the High Country, Colin reviews the fascinating THE LOCKET (1946) starring Laraine Day, Brian Aherne, and Robert Mitchum.

...Attention Southern Californians: The UCLA Film & Television Archive has resumed screenings at the Billy Wilder Theater in Westwood. Upcoming titles include a November 12th evening showing MYSTERY OF THE WAX MUSEUM (1933) and DOCTOR X (1933), hosted by Alan K. Rode.
...Notable Passings: Actress Cynthia Harris has died at 87. She starred with Edward Fox in TV's EDWARD & MRS. SIMPSON (1978) and was a regular face on television for over half a century, including a recurring role on MAD ABOUT YOU (1993-99)...Longtime Disney animator Ruthie Tompson has passed away at the age of 111. She was named a Disney Legend in 2000.
...Next weekend I'll be at the Arthur Lyons Film Noir Festival in Palm Springs. (Host Alan K. Rode was interviewed about the festival for Palm Springs Life.) Around the Blogosphere This Week will return on Saturday, October 30th.
...For additional recent links of interest to classic film fans, please check out my October 2nd roundup.
Tweet
Laura at 9:45 PM
Share